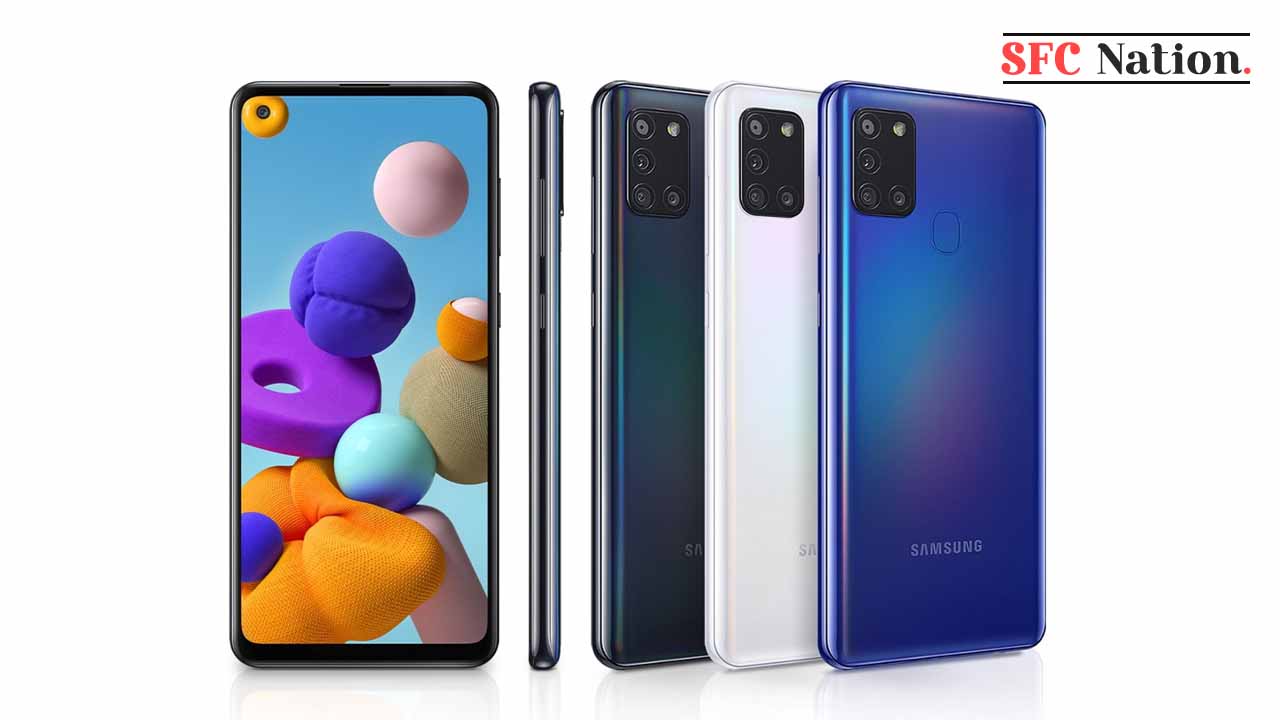 Samsung Galaxy A21 receives Android 12/One UI 4.1 update in US

Samsung’s foldable devices have grown rapidly over the years. We all know how famous Galaxy Z Fold 3 was last year, this time the Samsung Galaxy Z Fold 4 from 2022 seems to have been marked as another master in the folding market.

Samsung’s next-generation premium folding phone is on its way. Although the device may be unveiled in August, we’ve already heard rumors about the Samsung Galaxy Z Fold 4, which is sparking growing enthusiasm among Samsung fans.

Below you can check the early leaks and rumors of the upcoming Galaxy Z Fold 4 smartphones. We’ll be bringing every small and big detail about smartphones here.

Recently, Samsung has officially confirmed that it will hold the next Galaxy Unpacked event on August 10. However, the tipster IceUniverse just revealed that the Galaxy Z Fold 4 could weigh around 254g.

A couple of months ago OnLeaks shared the renders of the Galaxy Z Fold 4 that reveals the Galaxy Z Fold 3 like three vertically placed cameras but in Galaxy S22 Ultra like no module design. The concept by actually loved by fans, however, a new piece of information tells it wrong.

Another trusted tipster named @Mr_TechTalkTV claims that Galaxy Z Fold 4 will not face any upgrades in camera design, it will have Galaxy Z Fold 3-like camera layout on the rear. He also mentions that the primary camera will be 50MP.

Samsung Galaxy Z Fold 4 and Galaxy Z Flip 4 are coming in August and SammyFans can now confirm that the two upcoming foldable phones will come pre-installed with Android 12L-based One UI 4.1.1.

The new custom OS will obviously bring new features and changes. Also, we’ll see some major changes that Google has made on Android 12L.

It was earlier revealed that Samsung Galaxy Z Fold 4 will feature Snapdragon 8 Gen 1+ chipset, which will make the device smoother to use, and even better than this year’s high-end Galaxy S22 Ultra.

It is officially confirmed that the Samsung Galaxy Z Fold 4 will get four major Android and One UI upgrades along with five years of security patches. It means the device will get major updates till Android 16.

We just got the possible stock wallpapers for these upcoming devices. First spotted by @GaryeonHan, alleged stock wallpapers of Samsung Galaxy Z Fold 4 and Flip 4 are spotted in the 2nd One UI Watch 4.5 Beta.

A shining tipster known as Ice Universe revealed the images of the Galaxy Fold 3 and Galaxy Z Fold 4 that have been captured at the same angle. Although the crease is still visible on Fold 4, the image shows a huge difference. It is not as apparent as shown in Fold 3.

Samsung Galaxy Z Flip 4 will come pre installed with One UI 4.1.1.  It will feature the “Swipe for split-screen” function for easier multitasking. With this feature you can just simply swipe left from the right side on the home screen to open apps in a split-screen view.

Recently, a tipster Jon Prosser has unveiled the possible launch date of the upcoming Samsung Galaxy Z Fold 4 and Galaxy Z Flip 4. As per the reportt, both devices will go for pre-orders on August 10 while the official launch will happen on August 26.

Additionally, he has also revealed the three color variants of the Galaxy Z Fold 4 which are – Phantom Black, Green, Beige.

According to info, Samsung Galaxy Z Fold 4 smartphone is going to have a 1TB internal storage variant. The device will follow the steps of its predecessor in not having a microSD card slot.

Aside from 1TB, the Galaxy Z Fold 4 will also have 256GB and 512GB for, of course, low cost and for users who don’t need a lot of storage.

A famous tipster Ice Universe shared new case photo that shows a better side-by-side view of the alleged dimensions of the Galaxy Z Fold 4 compared to the Galaxy Z Fold 3. This once again suggests that the upcoming phone will have a wider aspect ratio than the previous models.

Recently a new leak reveals major changes in the design of the front side of the upcoming Samsung Galaxy Z Fold 4. Compared to Galaxy Z Fold 3, the Galaxy Z Fold 4 looks shorter. However, the screen view size has been improved. It’s now wider, providing users a better experience when unfolded.

Recently, tipster Ice Universe disclosed the case of the upcoming Galaxy Z Fold 4 smartphone. It shows a slightly improved ratio when compared to the Galaxy Z Fold 3. The rear camera system also seems to be enhanced.

The well known tipster Ice Universe indicates  that the crease will be minimized with the upcoming Galaxy Z Fold 4 smartphone. He says that the screen will look smoother, though the hinge will still be visible to some degree.

Samsung will introduce its strongest 3x camera with Galaxy Z Fold 4, which will be equipped with a 50MP main camera, a 12MP ultrawide angle camera, and a 12MP sensor with 3x optical zoom.

HoiINDI comes up with Samsung Galaxy Z Fold 4 in Beige and Silver colorways. With the very first appearance, the Galaxy Z Fold 4 is equipped with a 6.2-inch cover display with a punch-hole cutout for a selfie camera, which you will be getting a 7.6 inches inner OLED with 120Hz refresh rate, and of course, an improved under-display camera as well as S Pen support.

The next best release that everyone out here is anticipating from Samsung is the Galaxy Z Fold 4. However, the rumors and leaks are downgrading our expectations. The company would certainly have to do more than enough to meet our hopes this time, as they have already set a very high bar with the launch of Galaxy Z Fold 3.

So, this time we are expecting even better aesthetics, even better features, an even enhanced operating system, and a fantabulous camera.

As per the images, the device has a triple camera setup in a no-module design. All three cameras are placed vertically followed by a flashlight. These camera lenses look identical to the ones seen in Samsung Galaxy S22 Ultra earlier this year.

The upcoming Galaxy Z Fold 4 and Galaxy Z Flip 4 batteries have been certified by the BIS authority of India.

A famous tipster Ross Young unveiled the color variants of the upcoming Galaxy Z Fold 4 and Galaxy Z Flip 4 and it seems that the company is bringing new colors to the devices.

Samsung’s mobile business vice president – Kim-Sung-koo revealed that the company is working on the development of new foldable smartphones that are expected to launch in the second half of this year.

“We are currently all hands on deck regarding preparing the new foldable model scheduled for launch in the second half.” – Kim Sung-koo, Samsung VP (Mobile business).

According to SafetyKorea, the Galaxy Z Fold 4 foldable smartphone will be equipped with two batteries of 2,002mAh and 2,268mAh with model numbers EB-BF936ABY & EB-BF937ABY, respectively.

Both of the batteries produce an overall power of 4,270mAh, which might be marketed as a 4,400mAh battery.

A report reveals that Samsung MX Business, which is its mobile business, was reviewing the small pouch size batteries from LG Energy solutions on the Galaxy Fold 4.

If Samsung approves the use of LG Energy Solutions batteries for its new device Galaxy Fold 4. Then this would be the first time that it will be using this battery for its foldable.

Samsung aims to face stiff competition from devices like the upcoming OnePlus foldable and Google Pixel Notepad, this cut will be an advantage to achieve massive sales of the upcoming smartphone.

Samsung's Z Fold 4 and Z Flip 4 phone production for July are more than double what it was for the Z Fold 3 and Z Flip 3. Pointing to a very strong launch. Might see a price cut.

South Korean media revealed that LG Energy Solution batteries are expected to be installed in the next-generation Galaxy foldable phone.

Samsung Galaxy Z Fold 4 will meet a huge camera upgrade over its predecessor. It is rumored to come with 108MP primary camera and it could be the same 1/1.33-inch camera sensor used in Galaxy S22 Ultra.

The phone also has a 12MP ultrawide angle camera but it misses the periscope camera. Thus, it could feature the Galaxy S22’s 10MP telephoto camera with 3x optical zoom.

Same setup sensor as the S22U, might lack the periscope sensor

Samsung users and foldable fans were expecting that the upcoming Galaxy Z Fold 4 could come with built-in storage for an S-Pen. Unfortunately, this is not the case. The device supports S-Pen but there is no slot for it.

A tipster claims that the phone will be thinner and more compact than Galaxy Z Fold 3, which should improve its usability. Hopefully, the company won’t compromise with the battery for the thin design

Galaxy Z Fold4 will not have built-in S Pen. Fold4 will be a little smaller and thinner. This is correct. No one likes a brick.

[Exclusive] Serial production of the S-Pen for the upcoming Galaxy Fold (Z Fold 4) has begun in several Eurasian countries.#Samsung #SamsungGalaxyZFold4