Finally, Samsung Galaxy M22 getting Android 12 based One UI 4.1 update

Samsung’s Galaxy A12 surpassed Apple and Apple in the top 10 best-selling smartphones last year. Apple has significantly fewer models than its competitors who consistently occupy the first, second and highest, reported by Omdia’s smartphone model market tracker in 4Q21.

Since Samsung’s Galaxy A12 was first launched in the fourth quarter of 2020, quarterly shipments since 2021 have completely surpassed 10 million units, except for the second quarter, when Samsung halted it due to the spread of COVID-19 in India and Vietnam.

Samsung Galaxy A12 overtakes Apple to become most shipped smartphone

Annually, in 2021, a total of 51.8 million units were registered. It is the first Samsung model to surpass 50 million units in a year with a single model and is ranked first in shipments of 1,000 smartphones worldwide. 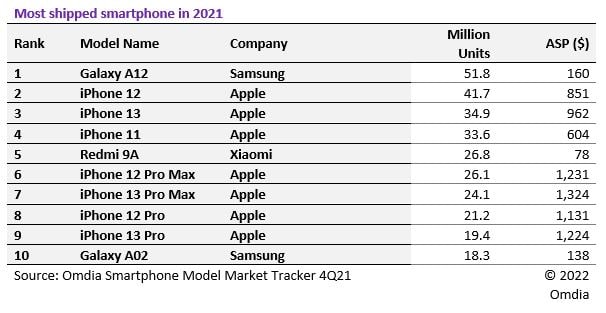 As the competition from Chinese companies increases, Samsung is strengthening its mid-to-the low-end range, and since 2019, the low-end J-Series has been integrated into the A-Series. In addition, Samsung continues to expand its range of models. to introduce multiple cameras and add consumer-friendly features.

Apple’s iPhones 12, 13, and 11, which ranked second to fourth, sold 41.7 million units, 34.9 million units, and 33.6 million units, respectively. The iPhone is a common model in the range that is cheaper than the Pro and Pro Max.

And the 5th model is Xiaomi’s Redmi 9A. Xiaomi shipped a total of 26.8 million Redmi 9A units, with an average model sales price of $ 78 per year. However, Samsung’s Galaxy A02 made it to the top 10.

In the top 10, there are a total of seven models, including Apple with two Samsung and one Xiaomi. Compared to last year, Apple added two more models and Samsung added two submodels. Like last year, Xiaomi ranked the model among the top 10, but it rose from 9th last year to 5th this year.