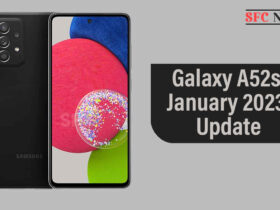 Always On Display or AOD is a feature available on certain Samsung smartphones that lets you view the time, date, notifications, missed calls, and more when the screen is turned off. With the One UI interface, you can do even more with AOD.

Samsung Always On Display app is receiving a new version update via the Galaxy Store. Users of the Galaxy devices can identify the latest update with version 7.1.96, which is currently available on select models.

Samsung has pushed the Always On Display 7.1.96 update with an updated package size of 38.32MB. The company is gradually releasing the update to eligible Galaxy phones and tablets.

There is no official changelog of this version mentioned, it’s likely to bring major improvements in functionality for Galaxy phones running Android 12 based One UI 4.1 / One UI 4.0 or below. But it can bring regular improvements to enhance the overall performance of the app.

Samsung has significantly improved the Always On Display feature with Android 12-based One UI 4.1. Meanwhile, the One UI 4.1 changelog doesn’t mention anything related to AOD.

How to enable AOD: